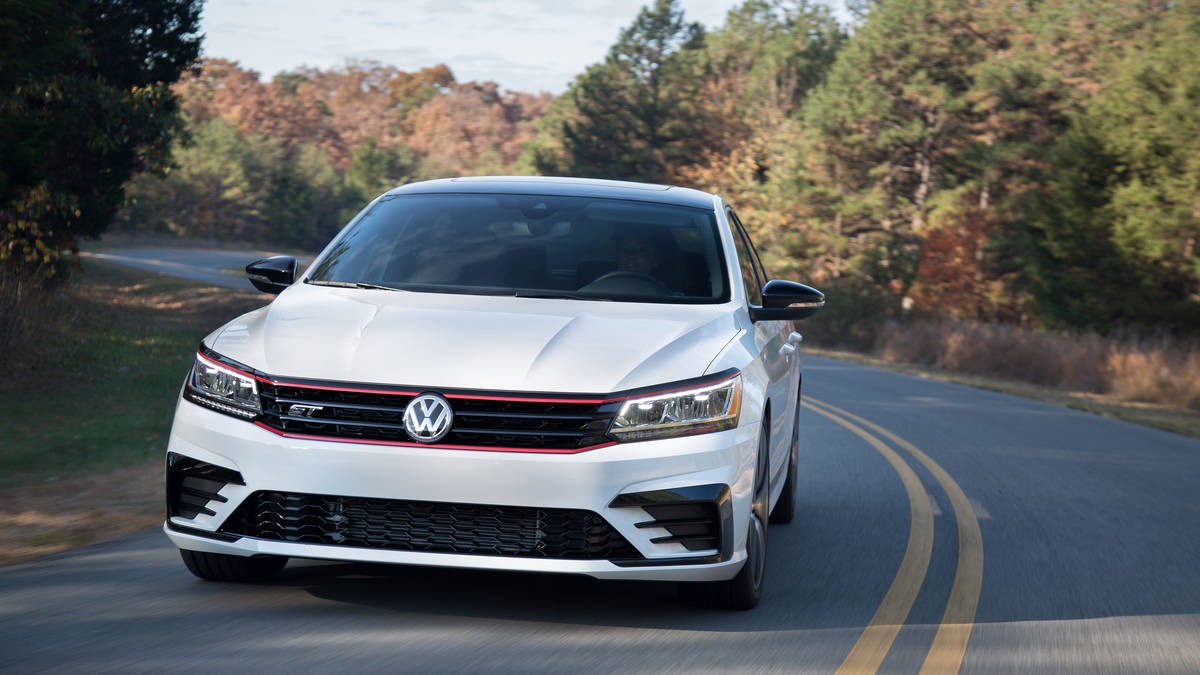 Since 2011 the Volkswagen Passat’s design hasn’t changed much, and while some might consider the appearance, both inside and out, a bit outdated, at least VW continues to offer a V6 engine. In a time when turbocharged four cylinder engines dominate the mid-size sedan market, there’s very few that come with a traditional V6. The closest competitor that comes to mind is the Toyota Camry XSE; a car that boasts a 301 hp V6 engine. Despite slightly less horsepower, the Passat GT undercuts the Camry in price by $6k – $9k, giving consumers an affordable option if the four cylinder Passat and Jetta just isn’t enough.

For performance, the 2018 Passat GT comes with a 3.6L VR6 engine that gets 280 hp and 258 lb ft of torque, and is paired with a 6 speed dual clutch automatic transmission. A 0-60 time of 5.8 seconds is right in line with the Toyota Camry XSE, Honda Accord Sport 2.0, and Chevy Malibu Premier 2.0. Some of the slight differences compared to the other Passat trims is that the GT is lowered by 0.6 inches and gets 19 inch Tornado design wheels. It also comes with the more aggressive R-Line front and rear bumpers, black roof, black mirror caps, and two-tone leatherette seats with contrast stitching. A GTI-inspired front grille will set the GT apart from other Passats, and when combining that full appearance package with LED front headlights and tail lights, the Passat looks more refined and sporty.

Volkswagen has marketed the V6 GT as an “American-born Sports Sedan”, which has led automotive journalists to test out cornering, straight-line performance, and braking in their reviews of the car. While VW has stiffened the suspension on the GT, it’s not a sports sedan, which is perfectly ok. I think many have misinterpreted or completely missed the point of the V6 GT, and instead of looking at it as a competitor to a Dodge Charger or any other sports sedans on the market today, it’s a step up from the four cylinder Passat, and may even be perceived as a more grownup VW GTI.

From the appearance alone, the GT trim has some design cues from the GTI and I can’t help but feel that Volkswagen is indirectly trying to appeal to the GTI owners who are ready to move on from the hatchback. The GTI is often associated with younger car enthusiasts who most likely don’t have a family of their own yet, but for those who do, it might be time to size up and that’s where the Passat GT comes into play. Let’s be honest, on a Saturday afternoon you most likely aren’t taking a Passat to the track, which is why this car fills the role of being a mid-size sedan you can have some fun in, while also being a good daily driver. On the other hand, Volkswagen has gone all in on the R-Line, which is why it could also be possible that introducing the Passat to a more sporty appearance is part of the plan to provide a whole new look to all models in the VW lineup.

Stepping inside you’re greeted by 8 way power adjustable heated two-toned leatherette seats. You’ll find faux carbon fiber trim on the dashboard, which I personally think is a nice touch. My only complaint, and a lot of this has to do with my time in the redesigned 2019 Volkswagen Jetta SEL Premium, is that there’s no digital information display. But again the GT is only an additional $2k more, so the upgrade in size and horsepower evenly balances out the downgrade in technology available and that’s something I could live with. You’ll get a 6.3 inch touchscreen with Apple Car Play and Android Auto compatibility, and it’s a very straight forward system to use.

In the back, passengers will get a lot of legroom as the Passat is one of the leaders in its segment in this category. For rear cargo space you’ll get 16 cubic ft of cargo room.

Some of the safety features that come standard on the Passat GT is a rear backup camera, blindspot monitoring, Forward Collision Warning and Autonomous Emergency Braking.

Overall the Volkswagen Passat V6 GT is a product of it’s time. With Toyota going more sporty with the Camry XSE and Honda having the Accord 2.0 Sport, VW had to respond to the growing trend in sport oriented mid-size sedans. We could debate for a while on whether the GT is the grownup GTI and whether that was even Volkswagen’s intention, but when a brand adds a sports appearance package that’s reminiscent of a popular model in the lineup and combines that with a V6 engine that could certainly grab the attention of maturing car enthusiasts, it’s definitely something worth noting.

Also with an aging design, Volkswagen had to bring something new to the table. Keep in mind, the all new Arteon will be hitting showrooms sometime in the fall, and seeing that VW is pushing the R-Line appearance package on the Passat and Jetta, the GT could be a sign of things to come for all models in the lineup from the German automaker.