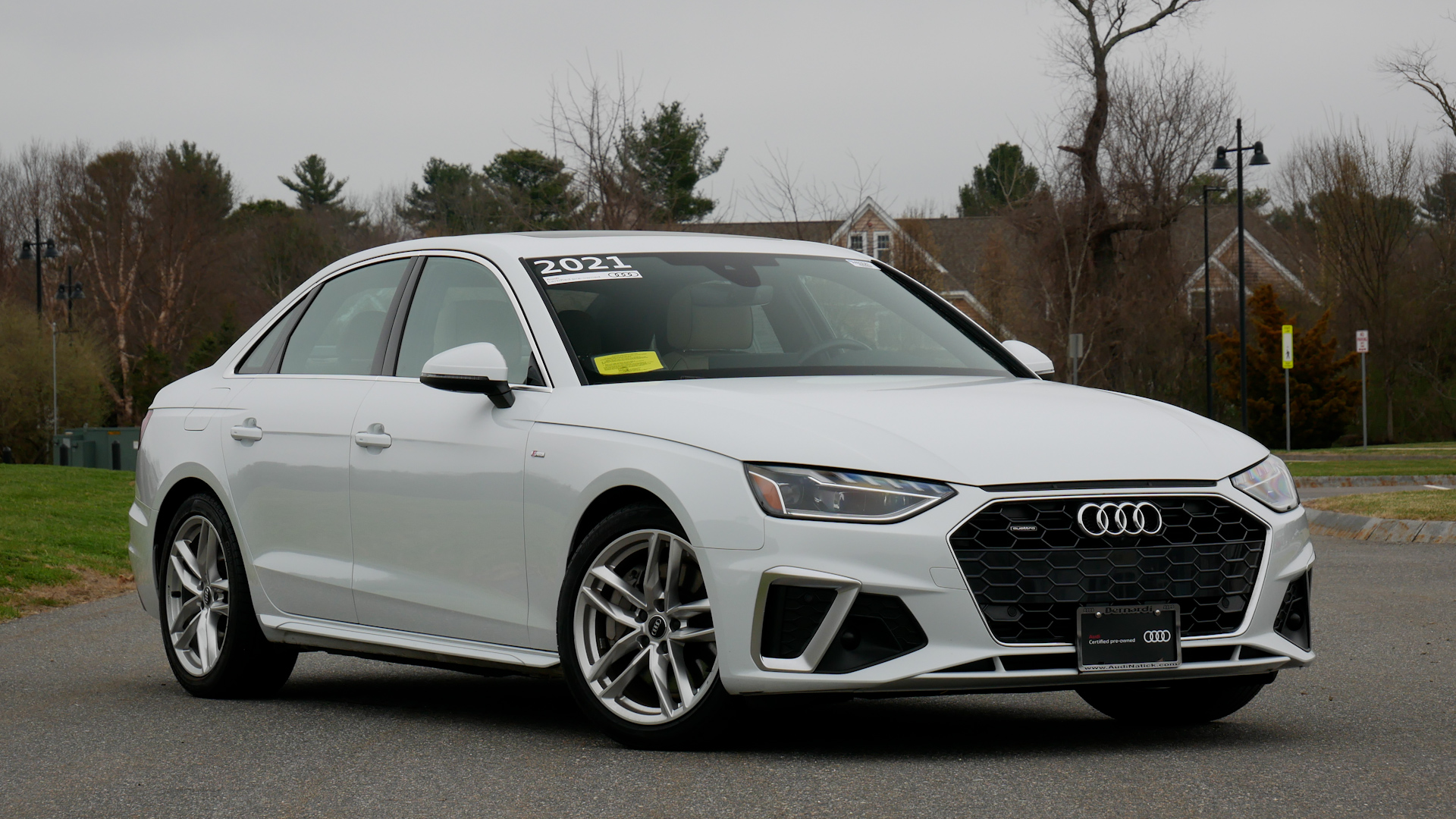 It wouldn’t be a stretch to say that in the 21st century, luxury sedans have lost their luster and cache, not only due to technology beginning to numb the driving experience, but also Americans in general have found crossovers to offer more value, which consequently has taken away from the development of four door cars. In a market that’s still highly contested with the BMW 3 Series, Mercedes Benz C-Class, Alfa Romeo Giulia, and Genesis G70 to name a few, it can be difficult standing out amongst the crowd, but for the B9.5 Audi A4, this sedan could very well be providing an experience unlike any other, and be a worthy replacement for the car currently sitting in your driveway. So here are 5 reasons why you should buy an Audi A4

When buying a luxury sedan that priced around $50k, you expect to be greeted by a driving environment that’s plush, upscale, and interactive, especially in 2022. While some competitors in this market will emphasize soft touch materials on the dashboard and arm rests, and extremely supportive seats, they tend to fall a bit behind when it pertains to technology. BMW and Mercedes Benz are no stranger to giving consumers a modernized cabin, but Audi’s interpretation of the 21st century interior is not only esthetically pleasing, but arguably the most intuitive and inspiring in this class. First your eyes will drawn in by Audi’s virtual cockpit, setting the tone for the rest of the interior, as resolution, quality, and customizability outshines what we see from the BMW 3 Series and Mercedes Benz C-Class. Not only can change up this display to your liking, but the navigation map is clearly showcased from this screen, and there is no question that rivals have had a difficult time replicating what Audi has done for their cabins.

It gets better though as you glance over to the infotainment system, as Audi’s latest MMI user interface continues on the classy and sophisticated quality of the technology you’ll be using. With the B9.5 facelift removing the rotary dial, this head unit is exclusively a touchscreen, which may turn off some buyers, however thanks to it’s quick responsive and lack of lagging, you can effortlessly get to different menus and not find yourself getting frustrated as you reach for the screen while driving. It’s from here where you can individualize your driving experience and access vehicle settings to enhance your time behind the wheel. Since our model was a premium plus, you’ll have the option to receive a variety of camera angles to help park your A4, or get out of time spots when backing out of a garage.

The rest of the interior will be more simplistic with all your climate control settings found just beneath the screen, and for the center console you’ll have a very clean design with only a volume and tuning knob to interact with. Comfort wise, the A4 is a great place to be, and despite these seats not being too aggressively bolstered, they do provide a good amount of support to keep you relaxed on a longer drive.

Audi’s design philosophy throughout the years has always leaned more towards the less assuming side of spectrum, where drivers can blend in on the roadways and not draw too much attention. Something we talked quite a bit about during the full review of the A4 is that Audi tends to be subtle, regardless of whether it’s the road presence, interior, or performance, and as a result they’ve crafted vehicles that exude a level of class. The facelift for this luxury sedan has worked wonders, modernizing the exterior, but also giving the A4 a hint of athleticism with the honeycomb grille that replaced the horizontal chrome accents on prior model years. The reshaping of the LED headlights and taillights adds an upscale vibe and will catch your eye, but the A4 still retains it’s understated outward appearance.

As you make your way to the back, there’s a few design cues that we see across the lineup, such as the chrome strip that runs the length of the rear fascia and seamlessly flows through the taillights, which will be present on the larger A6 as well. While we wouldn’t be quick to say that the A4 has a dynamic exterior, the dual exhaust outlets do give you a sense that this sedan is sporty, and that will be reflective of the driving dynamics. Best of all the A4 shares a lot of cosmetic styling with the S4, especially now with Audi making the S-Line standard for all 45 TFSI models, and for those not looking for the athletic performance you receive with the V6, you can still have a fun, upscale, yet subtle sedan that looks modern and sleek.

If you’ve driven an Audi S4, you know that the tighter steering and stiff suspension creates an exhilarating driving experience, and that the V6 and ZF-8 speed automatic transmission are a perfect pairing where accelerating is effortless. However, for non performance oriented models there’s always this perception that they can’t be enjoyable, and you’ll encounter a few cars in this segment that lack the feedback and refinement, specifically in sport mode when you feel inspired to drive aggressively. On the flip side, some luxury car buyers are primarily looking for smoothness, comfort, and quality, and to our surprise, the Audi A4 is capable of being both fun and upscale.

When looking at the powertrain, the A4 is powered by a 2.0 liter turbocharged 4 cylinder engine, that produces 261 hp and 273 lb ft of torque, and is paired with a 7 speed dual clutch automatic transmission. It should also be worth noting that to supplement this engine, there will be a 12 volt mild hybrid system to add 13 additional horses over prior model years. When easing into the throttle, you won’t experience any turbo lag, and in fact the linear power and quick gear shifts gave use one of the smoothest rides to date in this market. What you’re probably wondering is, does the A4 handle well, and how does it compare to some rivals.

Unlike the BMW 330i, there won’t be a weighted steering feel, and compared to the Alfa Romeo Giulia, the A4 isn’t going to be as athletic. However, when cornering on backroads, this car is buttery smooth, inspiring a lot of confidence, and not expected, was the sensation of being planted to the road as body roll is kept to a minimum, despite the lack of a spiorts tuned suspension. Ride quality is on par with rivals, and simply put the A4 does have dual personalities where it can be dynamic, relatively speaking, when you want to get frisky, but it’s on road demeanor in comfort mode takes on the persona of being premium luxury, which we feel gives this sedan a well-balanced feel when it comes to the driving experience.

You wouldn’t know it by the A4’s unassuming road presence, but this sedan has a unique perspective on what a modern day luxury sports car is in 2022. Competitors are either all in on performance, or they try finding the right formula where you receive the sophisticated and soft interior, but a half-hearted attempt at being inspiring to drive. While not the flashiest or verbose is this market, you can’t help but appreciate and enjoy what Audi has been able to accomplish. It takes characteristics from luxury sedans of the past and packages all these elements into a car that drives well, that feels upscale, and has futuristic technology to reshape this market. Historically speaking, brands like BMW and Mercedes Benz have to some degree forgotten their lineage and tradition to appeal to consumers in the 2020’s, whereas Audi is still being modern and relevant, but somehow continues to personify what a German luxury sedan used to be.

Jack of all trades

The A4 isn’t necessarily going to be a stand out in one particular aspect over the other, and likely won’t be seen as a class leader on paper. Yet with that being said, Audi’s engineered a sedan that’s arguably the most well-rounded in this market, where the performance is more than adequate, the suspension and ride quality is forgiving, yet rigid, and the driving environment is modern and tech filled. By definition, it truly embodies what it means to be a jack of all trades, and it’s for that reason we were pleasantly surprised during our time with the A4 as it’s competency and compliance on the test drive inspired us to stay behind the wheel. Ultimately, it comes back to the interior, because in 2022, you want technology that’s responsive and interactive, and many brands do fall short in providing that 21st century experience. This is enhanced with the comfortable and classy cabin design that Audi’s been known for over the last few years, and all-in-all, while understated and overlooked, the A4 is one of the best cars we’ve come across in this segment.