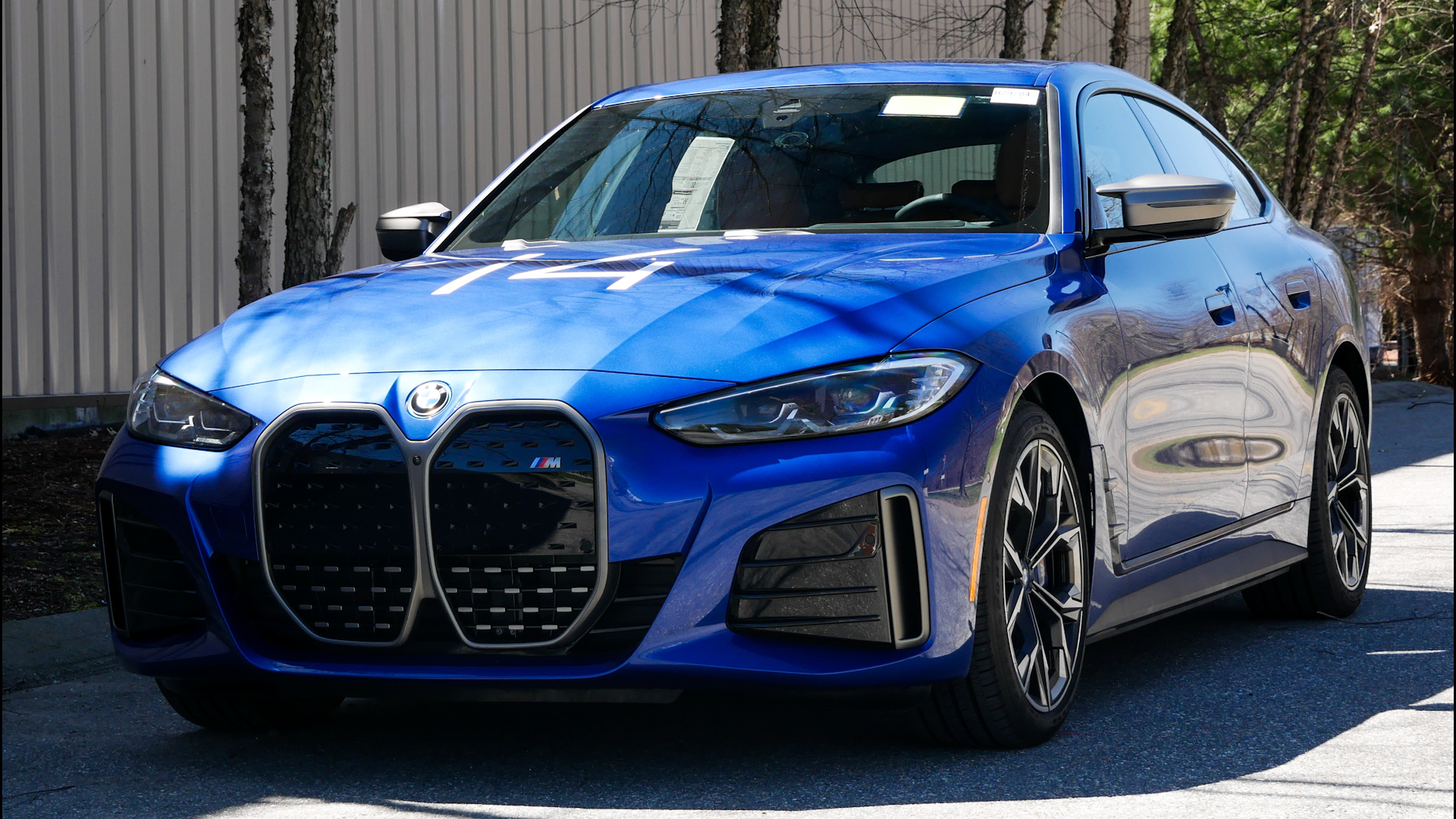 BMW is no stranger to the electrified world, after all they did produce the i3 and i8, but after two mildly successful attempts to set the tone for where the brand is heading in the future, they have returned with the i4 and iX, both of which are fully electric and ready to take on Tesla in this emerging market. The i4 is the first electric luxury sedan from a legacy manufacturer with a price around $60k, with only two rivals at the moment, with the Tesla Model 3 and Polestar 2. For enthusiasts and consumers, we’ve been waiting for a car to inspire further development, a car that gives buyers everything they desire in 2022 for an EV, and it’s quite possible that it’s the i4 that can entice Americans into going electric. So here are 5 reasons why you should buy a 2022 BMW i4

It goes without saying that the BMW i4 is a 4 Series Gran Coupe with electric motors, and it wouldn’t take very long to put 2 and 2 together since the exterior design is pretty much identical. With the automotive industry shifting towards electrification, brands are finding ways to emerge in this market. Some are developing unique platforms for their EV lineups, while others like BMW, are using pre-existing chassis to sell both gas powered and electric cars side-by-side to give buyers options if they’re on the fence about whether to make the switch or not. By choosing this path, the i4 has a familiar road presence and bodylines that buyers can get accustomed to, rather than some rivals going far too futuristic with the design cues and esthetics, which in some cases hasn’t been received well by the general public.

BMW’s approach is easing buyers into accepting a new technology, while at the same time proving that EV’s can look modern, but also conventional. More importantly is that the Ultimate Driving Machine is tackling a market that only Tesla and Polestar are currently catering to, while majority of the EV’s we’re seeing are crossovers, and it’s possible that consumers are more drawn in by the affordability of electric sedans rather than the price tags that you’ll experience with Audi E-Tron, Jaguar I-Pace, or even the all new BMW iX. The i4 is ushering in a new era and chapter for the brand from Bavaria, and what were seeing with this electrified 4 Series is only the beginning, as BMW plans to replicate what they’ve done for their first round of EV’s for the rest of the lineup.

The i4 and iX’s arrival is a very important milestone for BMW, but getting lost in all the buzz of electrification and possibly being a true rival to Tesla, is the much needed update to the interior technology that you’ll be interacting with on a daily basis. Starting off with BMW’s new iDrive 8 system, this almost 15 inch screen dominates the dashboard, with graphics, resolution, and quality being on par with Audi’s MMI user interface. Great to see once again is that the rotary dial and quick access buttons have made a return for another generation, which will likely be the preferred option when navigating your way through the different menus. What will take some time to get used to is the climate controls now being located on the screen, and receiving it’s own dedicated menu to clear up some of the button clutter that’s found beneath the screen on older models or even the current 4 Series. Even if you choose to exclusively use the touchscreen, the responsiveness is immediate, and is exactly what you’ll expect for a luxury car in 2022.

Maybe a more eye catching development is the new digital gauge cluster which finally gives us customizability and interactiveness that was lack in the past. You can change this display to showcase the information that’s relevant to you, and of course you can have the navigation map be the primary focus. The new head up display is far easier to read, even if it doesn’t show up well on camera, but with it being enhanced you won’t be squinting at the traffic sign recognition or digital speedometer. All-in-all, BMW’s new interior layout is a leap forward for the brand, and best of all for new buyers, the interior isn’t much different than the 4 Series Gran Coupe, which once again brings up the fact that the i4 is more conventional rather than being futuristic, and that why we feel that consumers will be eager to experience this sedan for themselves.

One of the obstacles that’s holding back enthusiasts from accepting the future of EV’s is that they’re not necessarily the most fun to drive. While some will point to the instant torque and blistering acceleration times, it’s the weight of the batteries and electric motors that take away from the cornering ability, despite EV’s having a lower center of gravity compared to gas powered cars, making them feel planted to the road. Whether it’s the Tesla Model 3, Polestar 2, or Audi E-tron, the lack of feedback from the steering numbs the driving experience, and there is a sense that the car is soulless. The BMW i4 on the other hand is so far the closest we’ve seen to perfection when it comes to the driving dynamics, even though there’s room for improvement.

BMW is under more pressure than rivals, as they’ve always prioritized steering and cornering to match the performance of their vehicles, and by going electric there’s the risk of jeopardizing their reputation. The i4 M50 we recently featured is powered by dual electric motors to give you 536 hp and 586 lb ft of torque, resulting in a 0-60 time below 4 seconds. Grabbing our attention and a more meaningful measurement of where the this sedan slots into place in the EV market was the agile cornering, but also the weight of the steering. Now it should be worth noting that the i4 does fall short compared to what you’ll experience in an M440i or M4, but within the confines of the EV world, BMW has at least positioned itself at this point in time as being the engaging and dynamic option if you want carve up backroads rather than obsessively accelerating in a straight line to get passengers reactions. However, and this will be an ongoing issue at least for the foreseeable future, the i4’s performance makes everything seem effortless and smooth, to a point where even in sharp twists and corners in the road, there’s no struggle entering or exiting bends, and that’s where, at least for enthusiasts, the electrified 4 Series might nit be deemed worthy. But if you’re looking to trade in your Tesla for a new experience, the i4 is a great alternative and replacement.

In the eyes of many Americans, EV’s aren’t the ideal replacement for a gas powered car, and it ultimately boils down to range. An i4 eDrive40 is capable of reaching 300 miles on a full electric charge, but to get the max amount of efficiency you will have to sacrifice AWD and experience a decrease in performance. The M50 on the other hand, is rated at 270 miles, which does fall about 45 miles short of the Tesla Model 3 Performance, however it will outclass the Polestar 2, regardless of whether it’s powered by a single or dual electric motors. Range will continue to be a talking point until we begin seeing estimates consistently hit the 400 mile mark, but for daily commuting and even for shorter weekend road trips, the i4 can get you where you want to.

From a practicality aspect, the 2nd row seating area is a bit tight for taller passengers, and you won’t be squeezing in a third person in the center, so if you’re looking for a family friendly EV you may want to look at the iX. For the rear cargo area, since the i4 is essentially a Gran Coupe, you will have a hatch where you can easily store items behind the 2nd row seats, and the 10 cubic ft of room will be on par with the Polestar 2 and Tesla Model 3.

Whenever a new challenger emerges in this market, it can get a bit controversial, as Tesla enthusiasts are eager to point out that rivals fall short when it comes to range, 0-60 times, and in some cases pricing. While the i4 M50 will be about 6 tenths of a second slower and the range isn’t as good as a comparable Tesla Model 3 Performance, BMW does give buyers something that Tesla can’t truly offer, and that’s a driving experience where carving up backroads is enjoyable, and the steering does provide a decent amount of feedback for an EV. Also factor in the build quality and the i4 being underpinned by BMW’s proven cluster architecture platform, and choosing the Ultimate Driving Machine could be a great decision. Is the i4 better than a Model 3? That’s still up for debate, however this sedan is exactly what the EV market needed, as BMW has brought to the table a formidable foe to the class leader that gives you the performance, technology, and refinement you desire in this segment.