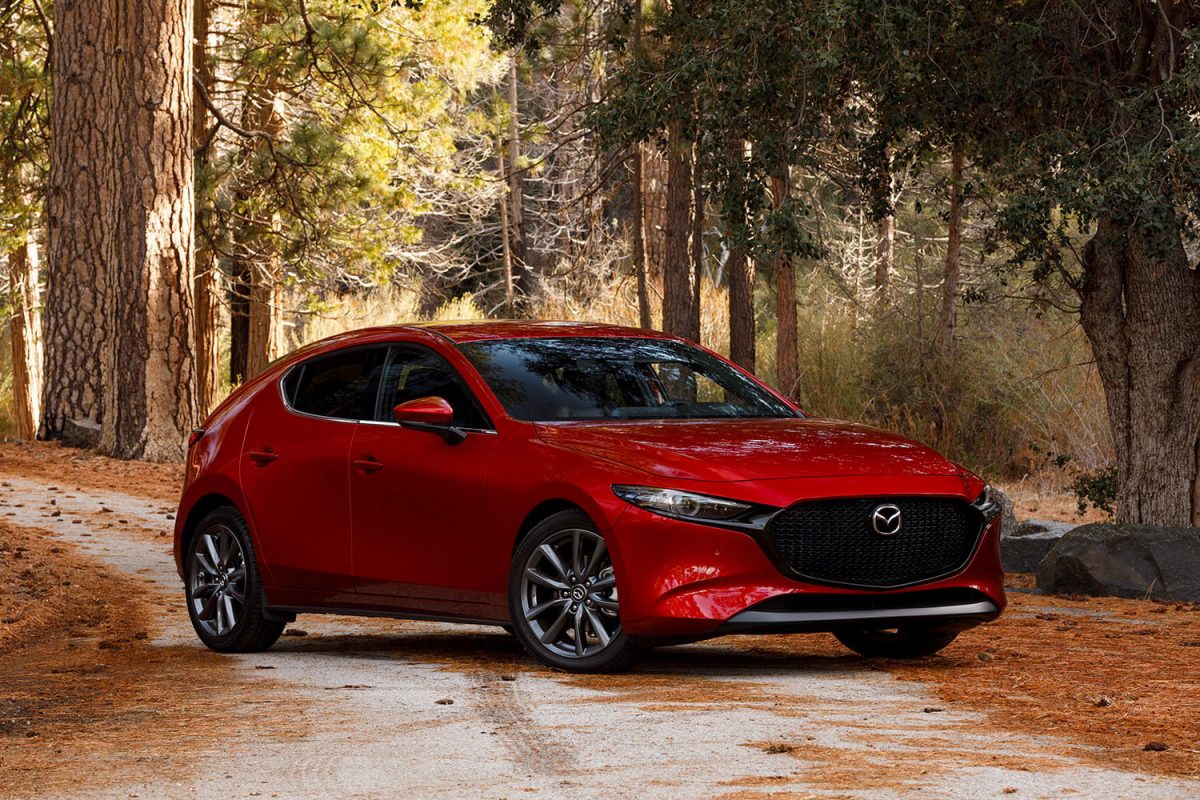 If you were in the market to purchase an AWD hatchback under $30k in the past, your only option was the Subaru Impreza. A car that for years seemed adequate enough to meet the demands of consumers in colder climates, now faces new competition that offers more than just year round practicality. The 2019 Mazda3 Hatchback is here to challenge it’s Japanese rival, and with a redesigned exterior and face-lifted interior it just might change your perception towards compact cars. Stated many times by dozens of people for the past few years, popularity in cars is on the decline as Americans prefer crossovers, but for the remaining percentage of buyers bucking the current trend, the Mazda3’s improvements from last generation could certainly sway consumers in this segment.

15 years ago, vehicles in this price range and market could have easily been seen as disposable cars, but one quick walk around of the new Mazda3 gives you the impression that this hatchback is here to be more than just a daily commuter car. Mazda has strived this decade to provide an entry level luxury appeal to set themselves apart from other Japanese manufacturers. A primary example is the 2019 Mazda3 hatchback, as both inside and out it’s overall design certainly grabs attention. 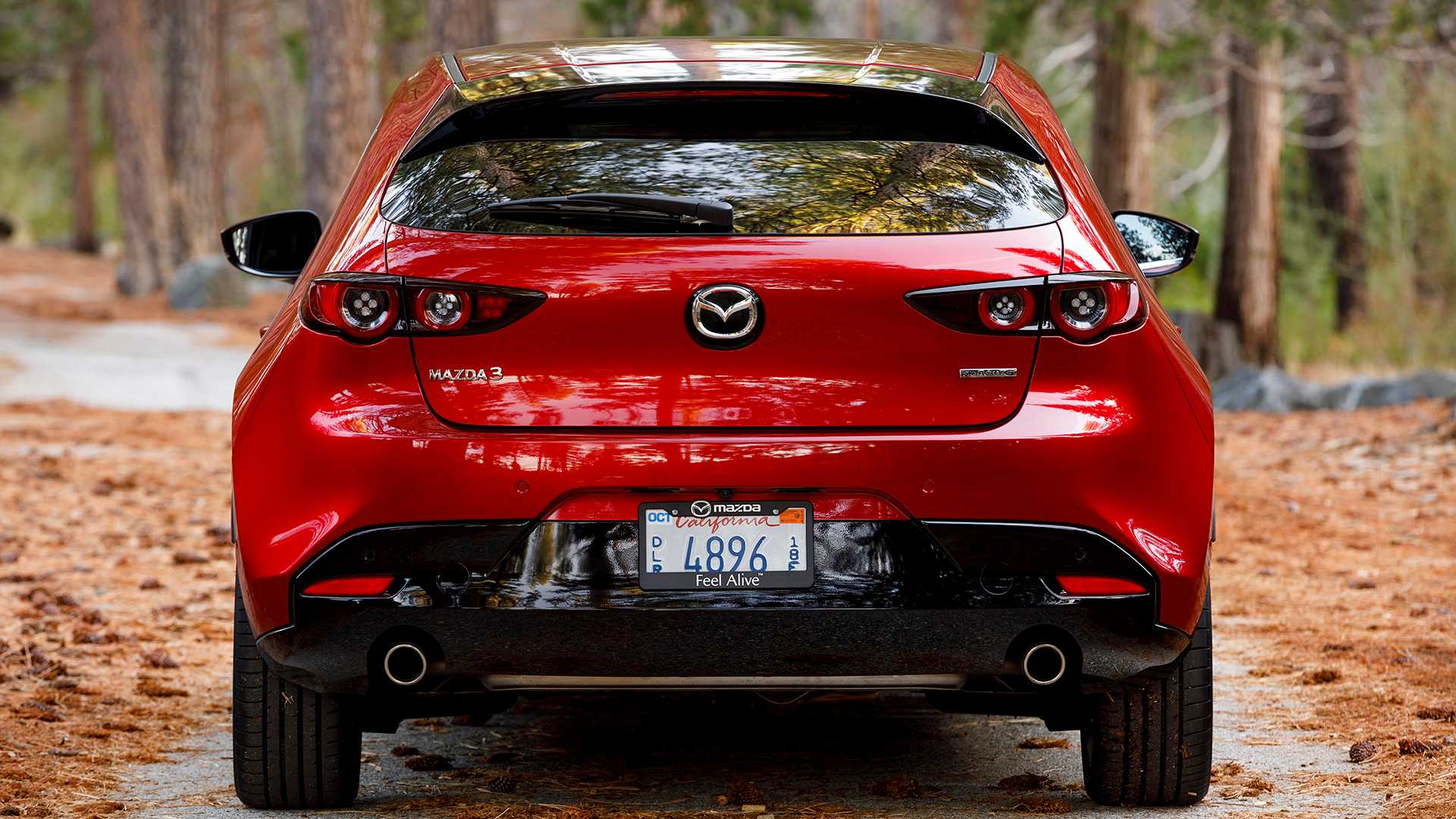 With a new model year comes less body lines, making this hatchback look more futuristic and almost concept car-like, rather than being just another face in the crowd. A restyled and more aggressive front fascia that’s more enhanced with the black mesh front grill and chrome delete for the Premium Package is an aesthetic improvement from the 2018 model year. Something we don’t usually talk about with redesigns that is actually one of the more notable differences from last generation is the restyled C-Pillar. From the rear, the Mazda3 hatchback looks almost like a subcompact crossover, and it could be argued that it looks like a lowered CX-3. We don’t usually see this from brands when it comes to the road presence of hatchbacks, as they usually get a distinctive rear end. Instead, Mazda reshaping this car has blurred the lines to a certain degree, giving their hatchback styling that fits right in with the popular crossover trend.

Standard on all Mazda3 trims are 18″ alloy wheels, with the Premium Package receiving a sportier wheel design with black finish. Signature LED headlight and taillight illumination along with an Adaptive Front-lighting System will also be equipped on this trim, which is becoming common for most cars in this segment.

Under the hood of the Mazda3 is a 2.5 liter four cylinder engine that puts out 186 hp and 186 lb ft of torque and is paired with a 6 speed automatic transmission. However, what deserves the spotlight is that Mazda now offers AWD as an optional drivetrain, which now gives consumers an alternative to the Subaru Impreza. Mazda also becomes a viable option for drivers in the northern parts of the United States where AWD is a priority when shopping for a new car. FWD does come standard however, and not surprising is that fuel efficiency is better, whereas you will sacrifice economical practicality for improved driving during the winter with AWD. In the city you can expect to receive 24 mpg in the city and 32 mpg on the highway.

Starting with the last generation of Mazda vehicles, the detail and design of the interiors significantly improved from what we were used to receiving. While competitors in the class and price range are joining in on the entry level luxury feel, Mazda was one of the first. For 2019 they improved the interior by going more simplistic especially with the dashboard and center console, while also paying close attention to quality.

The most notable difference from last year’s model is that the infotainment system has been placed further back. With Mazda attempting to go more premium, this resembles what you’d see in Acura or Lexus where the infotainment system doesn’t function as a touchscreen, and instead to access different features you’ll have to use a touchpad or trackpad. Apple CarPlay and Android Auto compatibility are offered on the Mazda3, and overall the slight improvements made to the infotainment system are good, but definitely not great as the monitor is rather small compared to competitors.

Unlike other vehicles in it’s class, Mazda offers different interior color options with Black, Red, and White. Heated leather seats come standard on the Premium Package, and what you’ll notice is soft touch materials are found throughout the interior giving the Mazda3 a luxury feel that provides additional comfort. One minor takeaway from last year is that your leather wrapped steering wheel won’t be heated, but the buttons would suggest that other markets will have this feature. While it’s not a major loss some competitors do offer a heated steering wheel, and with Mazda going with AWD for this model year I was hoping this small comfort features would carry over from 2018.

For rear cargo space the Mazda3 Hatchback gets 20.1 cubic ft of rear cargo room which is seven cubic ft bigger than the sedan variant. It does however fall just a bit short when compared to the Subaru Impreza hatchback, but if you can live with a minor discrepancy of seven tenths of a cubic foot then that can be overlooked.

Overall if you’re in the market for a compact car that offers AWD at a price right around $30k, then the Mazda3 is now an option if the Subaru Impreza was on your short list. It provides more comfort and horsepower, while also having a striking road presence. The compact car market may be dwindling, but in the meantime, brands are still putting out viable alternatives if you refuse to join the crossover frenzy.